Facebook, Twitter, service xyz, can’t censor you. I have seen this said so many times recently that I just had to say something. Yes, of course they can remove you from their platform and they can censor what you post on their platform. They cannot, however, silence you. They are only removing your ability to use them to communicate. This is different from losing the ability to say what you want. This is not government censorship, this is platforms (companies) and the collective people who run those platforms expressing their own freedom of expression by preventing you from saying whatever it is that you want to say.

Think of this on a very small scale. You could try to post something to my blog such as an advertisement. I have every right to remove your post regardless of what it says. This doesn’t change as soon as 2 people write to the same blog, or 10 or 100 or 1,000,000. It is still our blog and we can do what we want with it.

If your message is so powerful that these services don’t want you posting on them, post it elsewhere. That we collectively complain about these platforms rather than taking our communication elsewhere only makes them stronger. The Internet is still as broad and deep as it ever was. It is people who have a myopic view of it who have limited it to these several services. If you do not have a presence on Twitter you aren’t relevant? Says who? All the sheep who do nothing but Twitter and Facebook all day?

Seriously though. 90% of Facebook is people reposting memes. Your message can be heard better elsewhere.

Food is just food. Eat what you want.

A tragic scene unfolded today at the Comfort household when their youngest son was crushed by a pitbull. When interviewed, the pitbull claimed to have no knowledge of the pain and suffering he inflicted on the poor child. In fact, the answer “woof woof woof-woof” was all we could get out of him. He did have to stretch a bit before he would respond to questions. 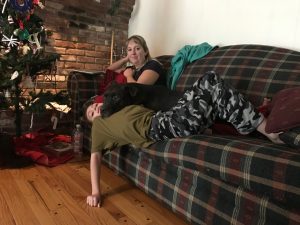 We spent a few hours today at the Science Center. We keep a family membership because there is always enough new or even old that is interesting or challenging. It is a good way to spend several hours to half a day.

Today we took Signe’s brother and his children with us. We started out making airplanes out of sturdy paper, dowels, and hot glue. One of Signe’s brother’s kids had a record plane when they launched them with rubber bands. At one time the plane was stuck high up in the corner of the wall and a concrete support it went so far. Everyone enjoyed making the airplanes, even if not all of them flew very well.

Each of the kids participated in the egg drop where they spent time constructing a protective structure of their choosing out of various types of materials. The idea was to drop the egg inside the container from at least a 50 foot drop and see if the egg survives. One of the items we had to work with was plastic grocery bags which make rather nice parachutes when attached with yarn to a carriage of some sort. I helped Dean with his project. We suspended a dixie cup with several strands of yarn inside of a larger structure built with straws and coffee filters. To the top we attached a plastic grocery bag. Dean’s idea was that the top coffee filter would be the first parachute and the grocery bag the second one. After dropping the contraption the system worked perfectly. After about a 1/3rd of the way near free-fall on the coffee filter parachute the grocery bag caught the air and opened perfectly. The entire structure hit the ground rather hard, but the yarn holding the suspended egg acted like springs and absorbed the shock of the landing. We were quite proud that the egg did not break, in spite of the fact that we didn’t completely enclose the egg in protective materials like many other people.

Dean and Pierce both found time to do many other challenging and engaging activities. Their cousins also enjoyed the experience, and everyone came away with many stories to tell. We came home and enjoyed watching the first Home Alone movie. It was a very enjoyable day.

Every year the kids’ elementary school has a PTO fundraiser where the kids go and play games, eat food, and have a great night.